3-7-77, On the Anniversary of Frank Little’s Murder

3-7-77. The only clue attached to Frank Little’s corpse swinging on a hemp rope from a Milwaukee Railroad trestle in Butte, Montana, on August 1, 1917. A Bureau of Intelligence agent in charge noted that the pasteboard placard warned the dimensions of a grave: 3-feet wide, 7-feet deep, and 77-inches long. If so, the warning pinned to Frank’s underwear would surely act as a deterrent to future labor agitation. But did 3-7-77 really indicate thus? Why not just write “six-feet under”? After my University of Oklahoma Press editor questioned the assessment, I was driven to do further research.

As it turns out, there are myriad theories concerning the significance of 3-7-7, known as the Montana Vigilante Code, and all stem from vigilante justice. Montanans are and were self-reliant. In a case of disorderly conduct, the code served as a dire warning. Get out of town–-or else. In Frank’s case, when the government would not step in to censor his incendiary language, a copper company acted on its own in Butte. Frank had had two prior warnings. The third warning pinned to his body was for the living. 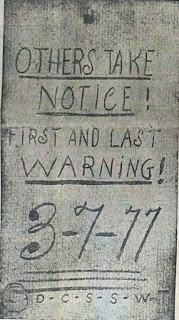 One theory is that the numbered code first appeared on November 1, 1879, in Helena. The city had become home to desperados who murdered and robbed the citizenry. The Montana Vigilante Code, painted on tents, fences, and walls, strongly advised outlaws to leave town. While some considered the meaning to be that the bad guys had 3 hours, 7 minutes, and 77 seconds to leave town, why say 77 seconds? Why not 8 minutes and 17 seconds? Were the vigilantes poetic? Not likely.

Another theory, a date, March 7, 1877. But historians provide no evidence of a significant event on this day, though this appears to be the most concise, logical explanation.

Still another theory is that the original warning came from a group of 77 Helena men. A secret organization? Perhaps. Undesirables were to purchase a $3 train ticket and leave by 7 AM. Fredrick Allen in his book A Decent Orderly Lynching: The Montana Vigilantes, 2nd ed. (Norman: University of Oklahoma Press, 2009), states such. Would recently arrived vagrants know the intended meaning of the code? Hmmm.

A more recent theory is presented below from the Montana Heritage Project:

The inner circle of vigilantes was composed of Masons, a fraternal organization with an ancient history, and the Masons chose the numbers.

According to John Ellingsen, Curator for Bovey Restorations in Virginia City as well as secretary of the Lodge of Masons there, a man died in Bannack in 1863 and requested a Masonic funeral. Though the Masons in Montana at that time were not authorized to hold meetings, they were allowed to conduct funerals. A few men put out the word and were surprised when 76 Masons showed up at the funeral. This was the first time this group of Masons met together and, counting the man whose funeral it was, there were 77 Masons present.

Surrounded by criminal violence, these men, who trusted each other because of their brotherhood in the Masonic Order, decided to fight back. Though their actions were not formally sanctioned by the Masonic Order, these men organized the Vigilance Committee in Virginia City. They decided that for a meeting to take place, the 3 principal officers and a quorum of at least 7 members would be needed. To these numbers, the vigilantes added the number of members present at their first meeting: 77. They took 3-7-77 as a sign, both for themselves and their opponents.

Perhaps. To me, this seems an awfully complicated reason for a simple warning, though Masons keeping the secret is logical. 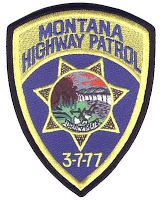 Today Montana Highway Patrol officers wear 3-7-77 on their uniforms, honoring the early vigilantes in Montana Territory. While they may not know the origin of the enigmatic code, it is no matter—the emblem strikes fear for the criminal and peace of mind for the citizen. The code is part of their collective history and they are proud of it. They should be.

But for me, great-grandniece of Frank Little, the code recalls a despicable act, carried out on this anniversary—one that reminds us Americans how precious our free speech is, and if we don’t pay attention, how quickly a dissenting group can justify taking away our rights.

Posted in Frank Little and the IWW

Thanks for subscribing! Please check your email for further instructions.

Something went wrong. Please check your entries and try again.
Scroll To Top